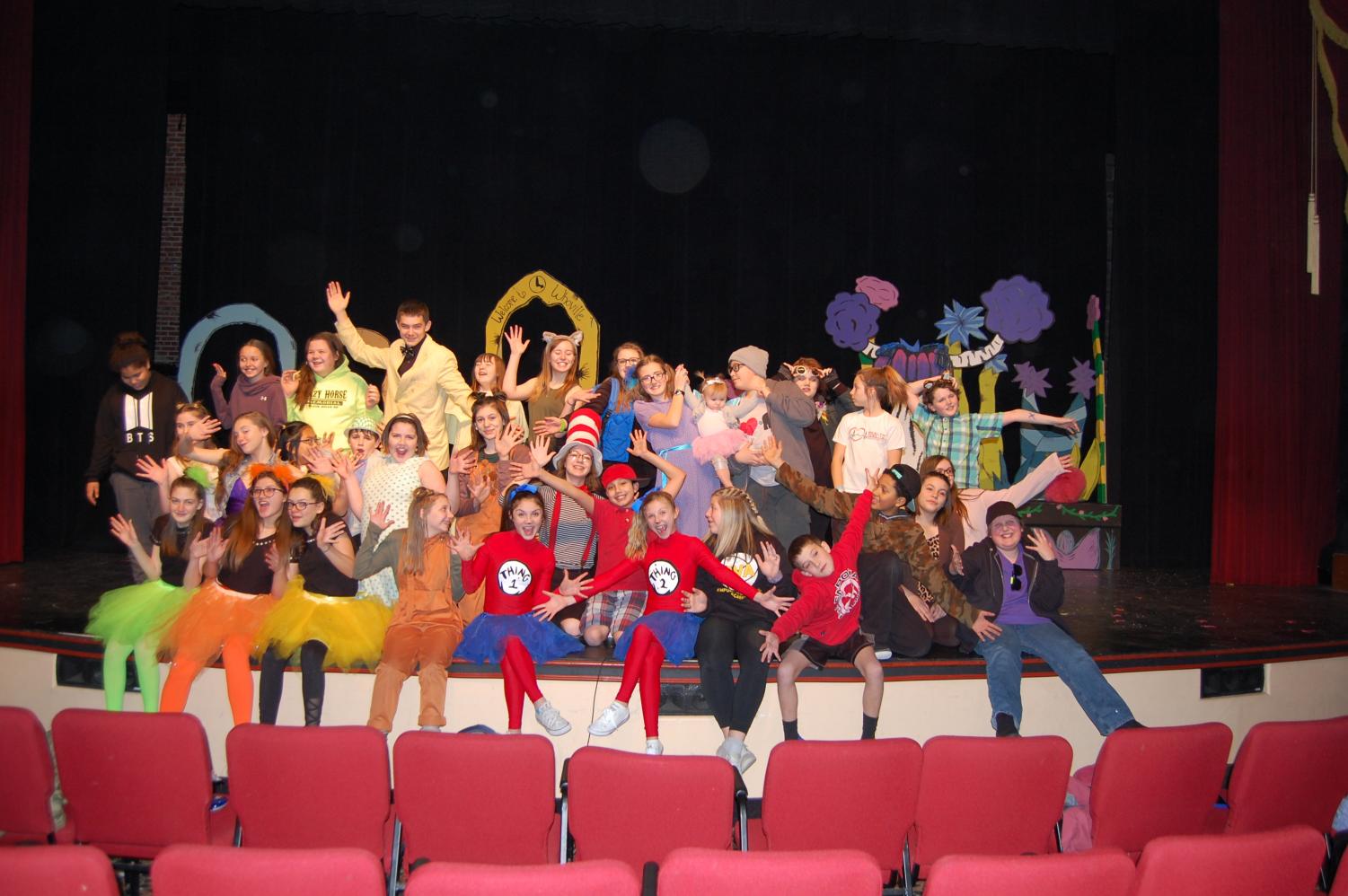 The cast and crew of Seussical Jr. Photo taken by Ms. Hastings.

The cast and crew of Seussical Jr. Photo taken by Ms. Hastings.

On March 1st and 2nd, numerous students from EMS performed in Seussical Jr., a musical that was featured in the Granada Theater. Mrs. Hastings was the teacher who orchestrated the practices and performance while creating a production with an interesting plot and giving students a great learning opportunity.

Seussical Jr. incorporates several stories written by Dr. Seuss, but the main story line follows that of “Horton Hears a Who.” According to Cesar (Jilbert) Zamora, the student who acted as Jojo, “It’s basically stuff from ‘Horton Hears A Who.’ This is the musical version of it, except we added Gertrude McFuzz to this. Horton is trying to save the small town of Who living in a speck of dust. Gertrude wants to get noticed by Horton.” The production starts off with the song “Oh The Things You Can Think!” where each and every actor sings together for the opening scene. This musical took quite some time to practice and prepare for. According to Laura Baldwin, the student who performed as the Cat in the Hat, “We started practice right after Christmas break, so about two months.”

What Some of the Actors Thought of the Performance

This musical definitely had a great turn out and many seats in the Granada were filled. According to Baldwin, “I think, for a middle school production, it was definitely a success. With all of the hard work we put into it, I would have been surprised if it wasn’t.” With the hard work and effort put into this production it deserves the success it was given. Not only was it a success and entertaining to many in the audience, the actors also enjoyed the experience.  According to Cesar Zamora, “My favorite parts of the show are when Gertrude McFuzz sings ‘All For You,’ and [when] we all sing ‘The People Vs Horton The Elephant.’ And also my favorite part is at the beginning of the show, when we sing ‘Oh The Things You Can Think!’” For aspiring actors/actresses, singers, or dancers, this was a great learning experience and Ms. Hastings did an exceptional job at creating a good environment to learn in. According to Baldwin, “My favorite part was probably getting to meet so many different people who were all so excited about the musical. It was like being a part of a big family, and I can say with certainty that I was not alone in feeling this. Ms. Hastings really worked hard on cultivating a positive environment for us!”

What Members of the Audience

This successful production was very much appreciated by numerous members of the audience.  According to a student of EMS who went to see the musical, “They (the actors) added themselves into the characters and you could tell that they worked super hard on it. Mrs. Hastings did a good job on picking who got who (which actor got which character) I don’t know what else to say, but the musical was really good for one put on by the school.” Another student who also went to see the show seemed very happy with the outcome of the production. They also had a very similar opinion on how the actors portrayed their characters, “Well for one, I think that they did a great job overall. I feel like they would have been better if they projected their voices more. But other than that they were terrific in their roles and didn’t even once forget a line. They never broke out of character and they did a great job with their numbers as a group.”

Overall, Seussical Jr. was a great musical production that was made possible by those of our school. The impressive performance was a great experience, not only for the audience to enjoy as entertainment, but also for the actors and stage crew as they learn and grow in their interest in theater, music, and other skills that were presented on stage and behind the scenes of EMS’s Seussical Jr.