Should School Be Pushed Back An Hour? 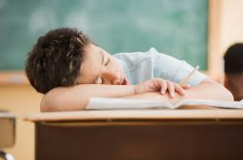 Have you ever set an alarm for the next morning and because you did not hear your alarm go off you miss the bus and are late for school? Or hear your alarm go to school and not be able to focus because you did not get enough sleep the night before? Well, I think we have all ran into that problem once or twice, but now I have a way to solve it. The solution is to push back school an hour.

One of the reasons I think that pushing school back an hour is a good idea is that it will give the students significantly more time to sleep. It will also ensure that the students are well-rested and ready for the day. According to A website called Why Schools Start Too Early,“Research suggests that some 50-80% of students are suffering from some level of sleep deprivation”. This means that almost every student that you see on your daily basis probably has some sort of sleep depravity. So if you have ever wondered why you are so tired that you can’t focus it is probably because you have not been getting enough sleep.

My second reason would be that it will also give the students ample time to get ready in the morning, and we all know everyone needs that. Whether it be you stay up too late or you wake up too early, you are not getting enough sleep which as we already went over can cause many unfortunate side effects. According to a very reputable source labeled Forbes,“Not getting enough sleep is common among high school students and is associated with several health risks including being overweight, drinking alcohol, smoking tobacco, and using drugs, as well as poor academic performance”. This means that there are many negative consequences that result from not getting enough sleep.

My last reason is that pushing school back an hour does not only benefit the students but it can also be an advantage for the teachers in more ways than one. One of those reasons being that the teachers need just as much time as students maybe even more. The other reason is that no one likes a grumpy teacher so if the teachers were allowed to get at least 30 minutes of extra sleep then I think that the teacher would be way more pleasant. According to a website called Neatoday “Starting school later allows adolescents to get more sleep, thus improving student’s physical and mental health, attendance, and academic performance”. Meaning that if a school were to start later that it would reap many benefits. But again I say that it would not only help students but it would also make sure that the teachers are well rested and have enough time to get ready. But also it would keep the teachers protected from some of the moodiness that comes for kids that don’t get enough sleep. I know that some people may argue that school is just fine the way it is but honestly, you cannot look at all of these statistics and facts and argue that it would be better for everyone if schools keep going the way they are going.

In all, we have learned that some of the benefits of pushing school back an hour are that it will improve academic performance, allowing you to get more sleep and have time to do everything you need in the mornings, and it will make sure to let teachers get that time as well. If you want to help EMS push back to school then take this Quiz. Once it has gotten a good amount of votes I will submit this form to the school board and see what they have to say. So vote to get more sleep!