How To Work Out A Math Expression 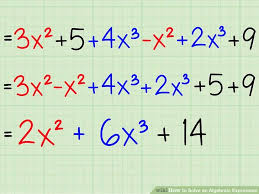 This is an image of solving an expression as a better example.

First, you need to know vocabulary so you know where to place everything. Let’s begin with operation. An operation is what mathematical process you’re using to solve the problem, for example, a plus or minus sign. Variable is another vocab word. A variable is an unknown number, such as a or x. There’s also a coefficient and a constant. A coefficient is a number paired with the variable like 54a or 12xy. A constant is a number that doesn’t change because it has no variable, for instance, 2 or 98. The last two are like-terms and exponents. Exponents are the power to which a variable or number is raised. A like-term is a term that has the same variables and exponents, for example, 18xy and 14xy or 9a2 and 87a2.

Finally, you need to check your work over again. You might be thinking right now, I don’t want to, or, I don’t need to I already know I’m right, but it’s really going to help you. I rush through it thinking, I get every answer right because I’m smart, but then I get problems wrong. Just go back through everything you did and check if you did your operations correctly or if you added, subtracted or if you did anything accurately.

I hope this helped you find the answer to what you were looking for! For me, it’s certainly easy. Although, the hardest part is probably when you accidentally do step 3 wrong because then it really messes everything up. If you didn’t understand, here is a demonstration at Khan Academy.