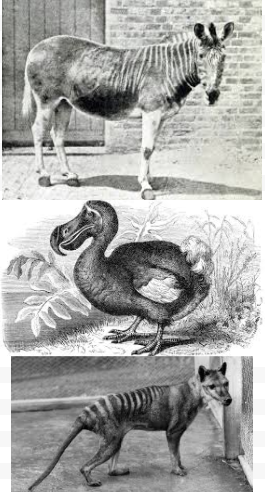 Top: Quagga, Middle: Dodo, Bottom: Tasmanian Tiger. If you want to learn more about these animals, click on this story!

Have you ever noticed how many animals have gone extinct as of late? I mean, there are too many to even count.  That is what humans are doing to the earth. But that’s not the point . The point is that I am going to put some names to 8 of these countless animals that have been driven to the brink (then pushed over the edge) by us humans.

Thylacine, now extinct, is one of the largest known carnivorous marsupials, evolving about 4 million years ago.

Date of extinction: The last known live animal was captured in 1933 in Tasmania.

Reason: Excessive hunting, habitat destruction and introduced disease, led to the rapid extinction of the species. Although Thylacine looked fierce, they were actually quite timid and, according to Live Science, “could be captured without a fight.”

One of several subspecies of leopard, the Zanzibar Leopard made its home in Tanzania.

The West African Black Rhinoceros was indiginous to west Africa, and their common diet included leafy plants and shoots around their natural habitat.

Reason: Sport hunting and habitat loss played major parts in the extinction of these animals but the real killers were the poachers and illegal hunters that hunted the West African Black Rhinoceros for its ivory horn.

Date of extinction: They were declared extinct in 2011 but there have been no sightings since 2006

The Caspian Tiger was a very unique tiger with a very unique stripe pattern that is very closely related to the Siberian tiger. (which is currently on the brink of extinction)

Reason: the extinction of the Caspian Tiger was due to poaching and loss of habitat

In all, I think you’ll notice one common factor in all of these animals. Humans. Whether humans poached them to extinction or caused habitat destruction(or both) humans were always thrown into the mix. Even though people talk about doing something about animal extinction, we still see little to no results. So, I think we need to get off our lazy bums and go fix something that we have so obviously destroyed. And even though we can’t bring back those countless animals that we have lost, we can surely make an effort to save the ones we have.