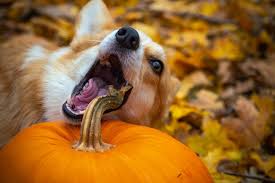 This is a Pembroke Welsh corgi, it seems to be trying to eat the pumpkin stem.

Looking for a new pet? Maybe one that likes sports? Belly rubs? I have just the one for you… a corgi! Corgis do well with almost all family types. They are very energetic and friendly. Corgis also make very good guard dogs!

To start you off, let me introduce you to the Pembroke Welsh corgi. They are the most popular out of the two corgi breeds. You might be thinking, what is the difference between the two? Pembrokes have no tail plus their ears are more round. Pembrokes are the more energetic type, but it depends on the individual corgi’s personality.

Both corgi breeds come from different places. Pembrokes originate in Pembrokeshire, Wales around 3,000 years ago! They are used for cattle herding sometimes. The name corgi stands for dwarf dog. Corgis began to become more well known across the world when Queen Elizabeth II started raising them.

Queen Elizabeth II has owned over 30 adorable corgis while being queen since 1952. Each of the corgis that she has owned are said to be related to her first corgi named Susan. Most of the dogs have been Pembroke Welsh corgis! She has two dogs named Vulcan and Candy as of 2018. Queen Elizabeth II likes Pembrokes because when she was younger her parents gifted her a corgi for her birthday.

Now that I have told you a bit about the more popular breed, let’s talk about the Cardigan Welsh corgis! With the Queen owning a lot of Pembrokes, that leaves the Cardigan with a smaller amount of love. Not a lot of people know about this so I will let you in on a secret. The Cardigans are actually more expensive because they are less common.

Another reason why Cardigans are not trending in the dog world is their color of fur. Pembrokes are a bright orange and creamy white, while the Cardigans’ colors vary. One of the bigger differences would be having a tail, seeing the more familiar corgis without a tail would be a little odd. Cardigans are also good family pets! They easily adapt and are super friendly.

Cardigan corgis come from a place called Cardiganshire, Wales. They came from the Teckel family, known for the dachshund. This breed of corgis have also been around for 3,000 years. Cardigan corgis herd cattle similar to the Pembroke.

We have talked about Pembrokes and Cardigans, now corgis in general. Corgis are not only famous for being cute, but also for memes and YouTubers. A couple YouTubers that own or are corgis would be Topi the Corgi, Vlog After College, Cooper the Happy Corgi, and Super Corgi Jojo. Most of the memes that contain pictures of corgis have them splooting or making funny facial reactions.

Corgis are very, very energetic! Have you heard of the Corgi Nationals? May 2020 was the 3rd annual Corgi Nationals. Corgis are super fast and athletic no matter what people tell you! There is also a channel that does reviewing on the races.

As stated before, corgis are amazing family dogs. Although there is one downside, corgis are bred to herd animals which causes corgis to be recommended to families with children over the age of 5 years old. For families with corgis or wanting them you will benefit from taking your corgi on a walk daily. They do not get very big so watch out for tiny corgi paws. Remember, if you ever want a family-friendly and super fluffy friend to cuddle with when you are sad, corgis are perfect for you!

To sum it all up, corgis are very good pets for people who live on farms, in the city, large families, and small families especially ones who are new to dogs. Corgis are very loving, friendly, energetic, small, and cuddly. You will love their large personalities.