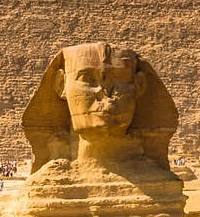 Sphynx from the great Pyramids of Giza.

The first wonder on the list is the Great Wall of China, known as the longest wall in the world, standing at 3,460 kilometers (2,150 miles). Thousands of people go there every year to see the amazing views it has with it. This old wall was built in 1474, people in china built this wall as a defence system against intruders.

The second wonder on the list is the Colosseum, used for gladiatorial contests. It is the largest ancient amphitheatre ever built, and is still the largest standing amphitheatre in the world. The construction of the Colosseum began under the Roman emperor Vespasian between 70 and 72 CE. The completed structure was dedicated in 80 CE by Titus, Vespasian’s son and successor.

The fourth wonder is Machu Picchu, which stands 7,000 feet above sea level. A symbol of the Incan Empire and built about 1450AD. In the Quechua indian language, “Machu Picchu” means “Old Peak” or “Old Mountain.” The compound contains more than 100 separate flights of stairs. Most of the individual staircases were carved from one slab of stone.

The final wonder on this list is Taj Mahal. The Taj Mahal is a white marble built by Mughal emperor Shah Jahan in memory of his third wife, Mumtaz Mahal. In Arabic, the Taj Mahal is known as the “crown of palaces”. It is said to be the jewel of Islamic art in a nation that is predominantly Hindu.  The Taj Mahal was built by a whopping 22,00 laborers, painters, stonecutters, and embroidery artists.

In conclusion, the wonders shown here are some of the best. I personally would love to visit the Great Wall of China because of how old and long the wall is. This was purely based on what I thought would be the coolest wonders to visit in the world. Many people would most likely want to visit a different wonder, and that’s okay.  Here’s a link to a website with some more facts about them: https://www.world-archaeology.com/seven-wonders/7-facts-about-the-7-wonders-of-the-world/