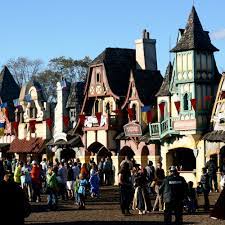 Who Made The Renaissance Festival?

What Is It Based off of?

The Renaissance Festival is based on a culture that was founded in Britten. This culture lasted from the 14th – 17th century. According to Google, “The English Renaissance can be hard to date precisely, but for most scholars, it begins with he Rise of The Tudor Dynasty (1485–1603) and reaches its cultural summit during the 45-year reign of the final Tudor monarch, the charismatic Elizabeth I (1558–1603).”. In Egland the renaissance era was called “The Elizabethan Era”. Some people around the world celebrate this festival after a harsh winter in the belief it would restore the land and the new crops would come.

Why Was It Made?

I interviewed some people that went to the Renaissance Festival in the past and here are the interviews.

I have Mrs. Acevedo here with me and I am going to ask her some questions.

Q: What are some things you did at the Renaissance Festival?

Q: What was your favorite thing you did and why?

A: I would have to say the henna tattoos. I just love the designs the artist can make, and that it’s not permanent but it will last longer than a stick on tattoo.

Q: Last question. How was your time there?

Next up I have Katie here with me and I am going to ask the same questions.

Q: First question. What are some things you did at the Renaissance festival?

A: We ate then went around and bought some stuff. Near the end we watched a play.

Q: What was your favorite thing you did? Why?

Q: Last question. How was your time there? Why?

A: It was entertaining most of the time, but it got embarrassing at times and got hard to keep up with.

Every person has a unique experience at the Renaissance Festival.  With the themed weekends, the endless entertainment, the arts, and the food, there are many things to enjoy.  A person could even go every weekend for the seven weekends it is open and enjoy it all.